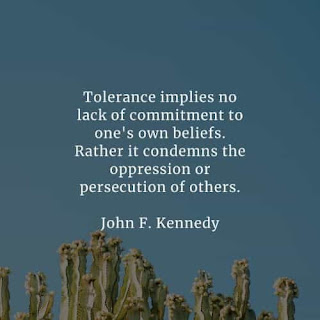 Tolerance means to tolerate the issues which are not acceptable, or a person finds it hard to agree with the beliefs. Tolerance can also be regarded as open-mindedness. Open a person is towards different ideas and beliefs because we live in a society where different people think differently.

For example, it is wonderful for some people to take drugs and even drink alcohol, but it is considered bad for other people. This is just one example; even when choosing a leader, some people are against the chosen leader. So tolerance is how comfortable someone is with the things which go against their will.

In India the tolerance level varies from person to person, some people accept things that do not happen the way they want and some people do not and actually protest in order to show their approval. So, at last, "Tolerance is the ability to forgive those who tend to speak before anything."