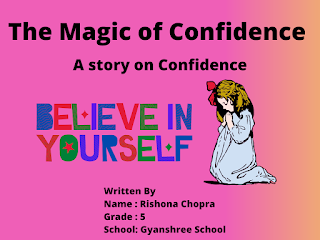 Confidence is a feeling where you feel capable. Where you believe in yourself. A thought of confidence could be -
“ I can do it.”
This means that whatever you have as your goal, you can achieve it. You only have to believe in yourself. That is, you have to be confident.
Another meaning of confidence is to not be nervous. It is to express your thoughts without feeling nervous. It’s not that you have to not think before you say something or do something. It’s just to not fear what someone else will think of you.
Now I’d like to present a short story on confidence-
The magic of Confidence
Once there was a young girl who used to live in the countryside. She was beautiful, intelligent, kind and simple. There was only one thing that she lacked, and that was confidence. She was nervous and had lost belief in herself.
One day when she was crossing a farm, she saw that the crops were all gone! Surprised, she went to the farmers and asked where the crops were. The farmers tearfully told her that it was one of those soldiers of the evil king of Wales. The king who everyone feared of. The soldiers had taken it all as the droughts caused crop production in Wales to below. So the king ordered to take all the crops from the nearby farms all for himself!
The girl felt angry at the king but was too nervous to say anything.
When she went home, she narrated the incident and her feelings about it to her mother.
Her mother, too, was angry at the king and told her daughter why she didn’t do something about it? The girl replied,” You know that. I am just scared too.”
“Well, this is the scare you have to overcome. Just believe in yourself. I am with you, and I’m sure everyone in this town is with you,” said her mother.
“I’ll think about it,” the girl said
That night the girl had made up her mind to fight with the King and get Justice back. Just by believing in herself…
The next morning she told the entire town her plan. They all readily agreed.
That day they went to the King’s court, and the young girl said,” You have caused us problems. You took our crops away only for yourself. If you take all the food from us, we might die from hunger and then who will grow the crops? Who will serve you food? If you need food, so do we.” The King was taken back with the angry response. He himself, having a nervous daughter, was surprised that the young girl was so confident. Now he had understood the problem clearly, and to everyone’s surprise, the king apologized and promised to take care that everyone had food to eat.
I’m sure you know now what confidence is and what it can do.
Name: Rishona Chopra
Grade: 5
Gyanshree School
confidence crops farm girl king scared
Location: Plot No 3 & 4, Noida Expressway, Sector 127, Noida, Uttar Pradesh 201304, India