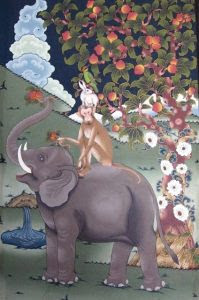 Cooperation is working together in a team to complete a particular task. Let me share a remarkable story where we cooperated with each other and got success.
Tucked away into the Himalayas, the wondrous kingdom of Bhutan has some beautiful stories. This story is about four friends, an elephant, a monkey, a peacock, and a rabbit. This is a well-known story all over Bhutan. In the beginning, the four friends were not friends. They argued about who had the right to a fruit tree, whose delicious fruit was enjoyed by all of them. This argument stopped when a man overruled them and claimed ownership of the fruit tree. The four friends wondered what to do to get the fruit they all loved. They wanted to help each other, so they became friends.
“ I will plant a seed in the ground,” the peacock said.
“I will water it,” the rabbit said.
“I will fertilize it,” said the monkey.
“I will protect it,” said the elephant.
The seed grew and grew until it became a tree. On the tree came the lovely fruit. Now the four friends had a problem. They could see the fruits, but they could not reach them. So they made a tower by climbing on each other’s backs; first the elephant, then the monkey, the rabbit, and finally the peacock. Through their friendship and cooperation, the four were able to share their favourite fruit. In Bhutan’s national language, Dzongkha, the story is called Thuenpa puen shi, which means cooperation, relation, four.
Name: Avni Karmarkar
Grade: 5C
Billabong High International School, Thane
Bhutan cooperation friendship story tree
Location: Road Number 27, B Wing, C Wing, Shree Nagar, Thane West, Thane, Maharashtra 400604, India