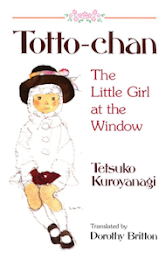 On the first day of May 2022, we started reading the book Totto-chan, the little girl at the Window by Tetsuko Kuroyanagi. This book is based on actual events, and the real-life Totto-chan is today a celebrated television actress in Japan. During World War 2 in Tokyo, a different school with railroad cars as classrooms was opened by an extraordinary man Sosaku Kobayashi, the founder and headmaster of the place. The school followed other teaching and learning methods; consequently, Tetsuko Kuroyanagi wanted to tell everyone about this place through her book 'Totto-chan'.

The characters that we have met till now are Totto-chan, her mother, her teacher and the stationmaster. Totto-chan is a young, chirpy girl who is full of life. She is bursting with curiosity and an eagerness to learn. Totto-chan is different from most other kids who want to just lead a simple life, whereas Totto-chan is never out of options about who she wants to become. Still, her lovable personality is always supported by her mother. Totto-chan's mother is a calm and composed lady who lets Totto-chan be who she truly is and wants her daughter to always be happy. Totto-chan gets expelled from her school, and her mother doesn't tell her about this since she doesn't want to alter Totto-chan's confidence.

The teacher at Totto-chan's previous school was a young, focused and practical lady though she was rigid in her terms and observed Totto-chan only as a pest in her class. Totto-chan and her mother met the stationmaster collecting tickets; he was a considerate and helpful fellow. He proposed that Totto-chan could work with his son since both wanted to work at the station.
The author of this book is a Japanese actress, voice actress, World Wide Fund for Nature advisor, and Goodwill Ambassador for UNICEF. She is well known for her charitable works and is considered one of the first Japanese celebrities to achieve international recognition.