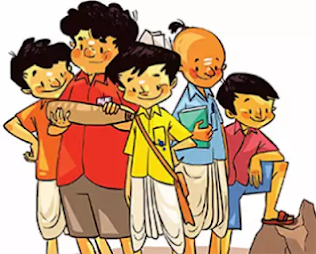 However badly Mani would have despised Rajam, he cannot bring the cruelty in his heart to hurt him. On being face-to-face, they apologize to each other and end up being great friends. What scared Mani the most was that if he hurt Rajam, Rajams' spirit would haunt and torture him, so it was best to be friends rather than foes.
I am not afraid of ghosts or spirits, except at night, whenever I sleep and even if the door is slightly open, I feel as if someone is peeping in, so I permanently close my door before sleeping. Also, I find it really hard to sleep alone after watching a horror movie since the scenes are living in my mind, and I just can't bear to think that there will be a ghost standing there when I turn around!
Swami talks about odds and ends, ups and downs, to his one-of-a-kind grandmother, who just wants to tell him how wonderful his grandfather was. The constant bickering between the two is very usual to others. For me, a conversation with my grandmother is fun. We talk about her times, like how school was then, how the uniform was and how strict the teachers were. She loves to talk about knitting, which is also her favourite activity and then my grandmother likes to ask me about myself. Also, she always cooks my favourite meals whenever I visit her.
Swami, Rajam and Mani are good friends, but they were impertinent to a fellow helper, and this also ended up in Rajam being offended, but that was alright as it was Rajams' fault in the first place since he was trying to show off. There is a mark difference between show, and show-off; we show everything from our books to clothes to gifts, but we also show off a colossal amount of things like a new watch or some expensive clothes. To show off is to exaggerate the object more than its actual value, and to show is to make others see what you have in its truest and purest form.
Anvesha Rana,
Grade 10-B,
Gyanshree School
Beauty of Life best friends Colourful life Freindship fun Humanity Humility Joy of Learning Diaries mani My Good School rajam School of Life Swami and Friends Swaminath
Location: Plot No 3 & 4, Noida Expressway, Sector 127, Noida, Uttar Pradesh 201304, India