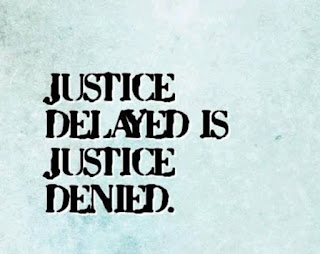 Justice hurried is justice buried, but at the same time, justice delayed is justice denied. Time is not timeless; therefore, everything should be done and completed in a particular period now, be it your procrastinated homework or a case filed by your grandfather in 1962. According to the Union Minister of Law & Justice, Kiren Rijiju informed the Rajya Sabha on 2 August 2022 that there are around 71,411 pending cases only in the Supreme court, out of which about 42,000 patients are waiting for their judgment to be passed for over a decade. We are not even talking about the lower courts right now!

It is still beyond the imagination of an ordinary man that the famous Mumbai Bomb Blast Case of 1993 is still partially undisposed! The mood question still remains. Is it OK for a person to waste precious time in litigation waiting indefinitely for justice to happen? Is it OK for the victims to wait to see the culprits face the music of justice? Is it fair for the innocents to see the light of day after a very long and unreasonable period only to find that the sad memories still haunt them? The court might remove the charges, but in society's eye, they'll always be remembered as the ones who went behind bars. Is this really justice?

As per the Indian Constitution, Article 21 clearly states that the right to a speedy trial is a fundamental right given to all accused, and if denied, they can approach the Supreme Court. Although there are many great things about the Indian Judiciary, this is one of its major downfalls. Justice getting delayed makes the country lack on its way to development and makes people lose faith in the judicial system and humanity. It can also encourage the affected people to take the law into their own hands. If the delay continues, the judicial system will collapse, and one of the most essential pillars of democracy may have to bite the dust.

To establish the rule of law more efficiently and effectively, the government, as well as the people of the country, should make more efforts to correct the delay by insisting on speedy disposal and getting the Indian Judiciary on track. The government can build more courts, hire more staff members and judges and enforce time-bound disposal while the people can protest, so the mute and inefficient government takes note of it. The people can also try solving minor matters among themselves instead of going to court every time.

Justice is a compelling word. It may not mean the same for everyone, but it should always be served to everyone. It is no less than a basic necessity. After all, Martin Luther King Jr. rightly said that "Injustice anywhere is a threat to justice everywhere. We are caught in an inescapable network of mutuality, tied in a single garment of destiny. Whatever affects one directly affects all indirectly."