What if our source of life disappered - Yashraj Sharma 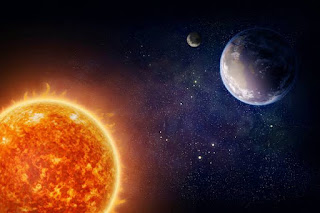 George R.R. Martin rightly said that "Once the sun has set, no candle can replace it."

If our source of life, the Sun, were to disappear, humans would have no way to survive. You might have imagined that day, but what would happen if it happened? Our fate would be sealed. Seriously, what would happen on Earth? We would not notice anything until after eight minutes. There would not be any change in the temperature because our atmosphere and oceans have stored enough heat to last us a few weeks, but after that, things will start to get freezing. The ocean's surface would freeze over in two months, and humans would slowly disappear across the globe. As a result, there would be a lot of human carcasses lying around freely, as no one could bury the bodies properly, and they would rot away.

Let's now talk about what would cause mass disturbances in the solar system. The Earth's tilt would gradually increase because there would be no gravitational pull from the Sun. It would take longer to set it to a fixed tilt again.

The next question will come to us: will Earth stop moving?

The answer is no. Earth would continue to move at its original speed, just not on the path it used to. The planet would drift into interstellar space along with every other planet in our solar system. The entire world would be in a state of panic and worry. But we needn't worry about this happening anytime soon because the Sun cannot disappear and still has a long life to live!