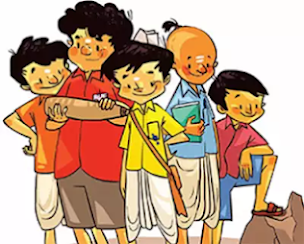 Swami and his friends are anxious about their match with the Young Men's Union. Specially Rajam, who is troubled by Swami's lack of practice and can't think of anything except their game. But what can Swami do? How can he elude drill classes and scout classes without getting caught? Somehow Swami manages to convince his doctor to tell his Headmaster that Swami suffers from Delirium and he must die if he were to attend these extra classes.
Happy at the prospect of being able to skip these classes, Swami now has enough time to practice and hone his cricket skills, but the freedom doesn't last long. The Headmaster catches Swami, scolds him and punishes him; Swami also realises that he had been tricked by the wicked doctor; the only option left for him now is to leave the school, leave his home and leave his town and then he finally goes to bid goodbye to Rajam.

However, on meeting Rajam, Swami realises there seems to be no other option. He fills Swami with the spirit of victory and the team's need for Swami, and Swami feels that he will leave after the match.
My favourite subject in school is History because knowing about the past to not repeat the same mistake in the future is History. History improves us. It makes us take rational decisions, creates a conscience and helps in an outlook for the future.
Anvesha Rana,
Grade 10-B,
Gyanshree School
Beauty of Life care Colorful Life love passion Swami and Friends
Location: Plot No 3 & 4, Noida Expressway, Sector 127, Noida, Uttar Pradesh 201304, India