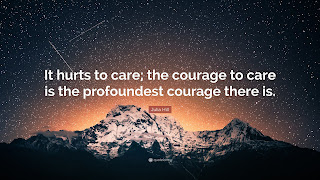 Hello everyone! I am going to share my real-life experience on courage. There was a bird who had broken its wing and was lying on the ground. No one showed the courage to touch the bird and heal it but I showed the courage to heal it up and  and sometime later it flew away. Initially. I was also scared to touch the bird but I decided to show a little courage help that little bird. So this is how I showed courage and cared for the little bird who broke its wing.