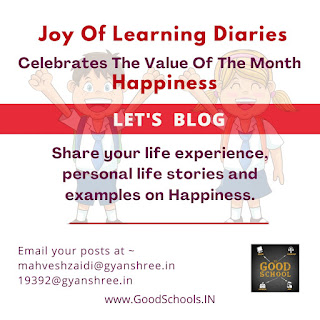 As we all know, happiness is a feeling where we feel pleasant, jolly and satisfied, but where do we get happiness?
All of us want happiness in our lives, but there are so many bad things happening in the world; how on earth can we be happy? Here's the answer, we don't get happiness from things and situations. Even the worst thing in the world can have a positive side!! So if we take a look at each case from a positive angle, we can easily be happy. We do not get happiness from the environment but from within.
To understand it better, let me tell you a story-

Once there lived a young boy named Jack. People said that his luck was never on his side, and he was also known as the unlucky boy.

Once in his exam, he broke his pencil, and it took him 10 minutes to sharpen it! The other day in the park, he fell several times and from that day till the next few weeks, he was not able to play. Such minor unlucky instances made Jack very sad. It was like his happiness was lost.

That night Jack wanted to cry all his pain out, and he called out to his mother and said, "Mum, everyone calls me the unlucky boy, and it really isn't my fault, and what did I do wrong that my luck never supports me?" His mother, surprised, told him, "My dear, your luck was forever on your side; you just had to take a look from another angle. When your pencil broke, didn't your teacher give you extra time to sharpen it?" Jack said, "She did". His mother said, "Well, then you could have used that time to calculate a few questions too, right? Jack, realizing what his mother said was true, happily cried out, "Yes, and when I got hurt?" "When we get hurt, it helps our body grow stronger!" said his mother. "Oh yes, mum, yes.

Thank you for making me realize that," said Jack, smiling.

From that day, Jack was never unhappy and found little joy in everything!

So even if a thing doesn't have a positive side, don't be sad; you can be happy by thinking about the solution to that problem!