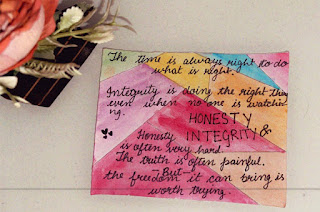 Every action has an equal and opposite reaction. Newton's third law of physics. Simply put, a good deed done by a good human will eventually return to them. Similarly, an evil act done by anyone will return to him or her. The simple rule of karma is what goes around comes around. Take Ravan from the Ramayana, for example. One wrong decision and we all know how it ended.

In a world as small yet as big as ours, it isn't easy to find people who are always honest and know the importance of Integrity. We all know what these words mean, but most don't practice them. Maybe that is why the world is the way it is. The questions might arise:

Where exactly can you find Integrity? Why are they so important? Are they even different? Why should you be honest? Just keep reading because I promise you will surely learn something new by the end of this article.

I like to believe Integrity lies within, waiting for itself to be found. Although Integrity and honesty are not qualities we have had since birth, we tend to develop them on our journey of life. Those lucky to have the proper upbringing create this early in life, but those who are taught to do things that aren't always morally right usually develop it a little late in life after being deceived or maybe by just finding the right company. You all must think that it is just about upbringing, but there's more to it. It isn't always about upbringing but also about practising it. Some people were on the right path but changed to the wrong one after being deceived or for various other reasons.

Practising these pleasurable qualities is what we lack because many of us are too afraid to speak the truth and wonder why we should get in trouble by telling the truth when dishonesty is shouting to save us. The moment we do this, we lose our honesty and Integrity because Integrity and honesty are qualities that go hand in hand. If you are honest, you sooner or later gain Integrity. There is also a misconception among people that honesty and Integrity mean the same, but that's not true. Honesty means telling the truth to people around us and ourselves, no matter the cost. Integrity means constantly staying on the right path by making the right decisions, like being honest.

According to Socrates ( Greek Philosopher )

"A MAN WHO LIES TO HIMSELF HAS AN ENEMY LIVING WITHIN."

And this is not a person; it is his conscience not guiding him the right and wrong. Even though honesty is essential. We aren't always honest, are we? At some point, we all lie. But there are some exceptional cases when lying isn't bad. Yes, lying can also be good. When you lie you don't hurt someone's feelings. These are white lies. These are lies told with good intentions.

Even though honesty and Integrity are qualities that require a lot of courage. Being honest doesn't mean things will turn out the way you hoped. People might believe you are lying, and they might not trust you, but sooner or later, the whole story will unravel itself, and people will know the truth. So if you are honest, you will get what you deserve, maybe not immediately, but it's a matter of time until you get it and when you do, your heart will know it.